The event marked the last PBA Women's Series event for the 2009-2010 PBA Tour season. With 32 women competitors and 64 men comprising the field, the bowlers competed 14 games of qualifying separately.

We bowled 7 games of qualifying the first day, and I personally struggled and had yet another roller coaster block. Not being lined up well to start, I shot 173, 202 and then a disastrous 148. Finally switching to the Bounty Hunter Pearl, throwing it very slow and playing very straight and inside, I shot 209, 209, 254 and then hit a bad pair for a 184 finish. I ended the day at -21 and was 42 pins out of the top 16 cut.

The next day, we came back for our final 7 game block of qualifying. After making several surface adjustments on my bowling balls (i.e. sand blasting quite a few), I had a much better second block. I used the Clutch Solid all day and played the tightest line inside, keeping my ball speed down as much as possible. I had started with the wrong ball the first few frames, leaving a pair of splits, then switching to the correct ball and shooting 183, 224, 207, 238, 267 (with the front 8), 229 and 201 for +128 overall and shooting +149 for the block. This block rocketed me to 7th place.

With the women finishing the 14 games of qualifying first, it was then a waiting game to see which of the men would finish in 7th, thus being paired with me for the duration of the tournament. That bowler ended up being exempt player Steve Harmon.

The next day we bowled 16 games of round robin baker match play, meaning that we alternated each frame to complete the game. Steve anchored for the most part, as his look on the lanes was MUCH better than mine. Unfortunately, we struggled to win matches and with 30 bonus pins on the line, that proved to be devastating. We only won 5 out of 16 matches, although one win was against the dominating team of Jason Belmonte and Michelle Feldman. We finished 13th overall.

A few side notes and reflections for the season...
Although this was the first season that I failed to make a TV show for the women's series, I am not totally disappointed. I was badly injured for the majority of the World Series of Bowling, which comprised 5 out of our 7 stops. And I still managed to just fall short of the TV show for the PBA Women's World Championship, coming in 3rd place overall.

I'm not entirely sure if the World Series of Bowling concept is such a good idea, simply due to the fact that we only competed in one bowling center the entire time. This highly favors any bowler whose natural game matches up with that center's characteristics. No matter what pattern that was put out, those bowlers were still going to have the advantage. I think that the concept would have been better if the tour went to somewhere like Las Vegas and competed at a different bowling center every week, but still remained in the same city for an extended period of time.

Another change for this season, was the complete separation of the men and women bowlers each tournament. The women either bowled at completely different times or as in the World Series of Bowling, competed in a completely different area (the Arena Bay) than the men, making it more difficult for fans to watch both the men and women. Prior to this season, the women competed qualifying mixed in with the men and shared paddocks/ball workout areas. This year, everything has been separated between the men and the women, which in a way feels a little like the women have been pushed aside. I will say that having our own paddock and work out area was definitely a plus, but the rest was a little disheartening.

Lastly, I'd like to thank the United States Bowling Congress (USBC) for it's continued support of women's bowling! Without USBC we wouldn't have had the PBA Women's Series for the last three seasons.

I do have one HUGE favor... anyone who is happy seeing the women back in action on TV, can you please send an email or write a letter to USBC stating that fact. In these hard times, you never know what next year brings and bowling needs to not lose professional women's bowling again. Please pass this along to all of your friends. 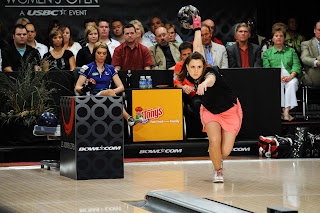 Over February 5-7, I competed in the only regional that is relatively close to my house - the PBA Del Rosa Regional. We bowled on the Viper pattern. However, the scoring paced proved to mimic more of a house shot, as it took +178 to make the semi's.

Many touring pros bowled the event, as the regional fell inbetween the Dick Weber Open and the USBC Masters, which added a nice touch. The regional is always a great event to bowl in because of the great job done by Del Rosa Lanes Owner Nicole Ellison and Manager Dave Wodka.

On Sunday, the top 37 bowlers came back for 5 more games of semi's and then the field was cut to the top 16 for single elimination match play.

I ended up in 10th place in the tournament, as Patrick Allen captured the title.

This week, I'm bowling in the PBA Don and Paula Carter Mixed Doubles event in Denver, Colo. Check out pba.com for results and to watch live on Xtra Frame. 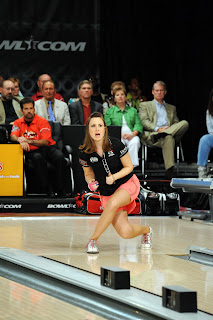 This past week, I competed in the PBA Dick Weber Open in Fountain Valley, Calif. Making the event more special is not only the fact that the event is named after one of bowling's "Greats"- Dick Weber, but also the fact that this event marks the only PBA National Tour event that is close to home.

With many friends and family in attendance, I wanted to have a good showing at the tournament. With this tournament being only my second event back at almost 100% after my leg injury, I still had high expectations.

We bowled three 5-games blocks of qualifying. The first day, everyone bowled two squads - one block on freshly oiled lanes and one on the burn (meaning that the lanes weren't re-oiled after one squad).

I bowled on the fresh first, and had the most roller coaster block I think I've ever had. I started out strong shooting 199 and 235, which was good considering the scores were lower. Then I had a mental lapse and absolutely made the wrong decisions with some ball changes. Everything I tried resulted in a split or washout, as I shot 161 and 139! Yes 139! I finally got lined up in the 10th frame of the 139 and was upset at my self enough that I decided I wasn't going to miss the next game. I ended the block with a nice 248 game, leaving me at -18 for the 5 games.

Then we had a LONG break and came back for the night block on the burn. Keep in mind that the lanes started out the day hooking pretty good, so by the time the other squad finished and we started on the burn, I was already playing 20 at the arrows (to start). So you can imagine all of the guys lofting the left gutter cap by the end of this block.

I bowled really well on the burn, shooting 225, 213, 244, 177 and 199. By the end of that block, they got pretty nasty. I was already walking around the ball return on the right lane, throwing it hard and trying to loft it. So the last game I even decided to go to my plastic ball on the right lane and struck for a key turkey to save the game. I ended the day at +40 overall.

The next day, we came back for our final qualifying block and everyone bowled on the fresh. I knew I needed to shoot about +120 to make matchplay, which was the goal. I made a bad decision to start and started out playing the wrong part of the lane with the wrong ball, ultimately shooting 164 my first game. Not the start I had hoped for!

I then switched balls and angles to play straighter up the track and had a much better reaction. I then shot 246, 199 and 246. Going in to the last game, I needed a BIG game to jump into the matchplay number. I ended up on a bad pair and grinded out a 181 to finish the block. I ended the tournament in 42nd place overall at +76, cashing in the event, but missing the top 24 match play.

All-in-all it was a good week. I bowled pretty good, had our first guests stay at our new house and had a successful house warming party. Til the next event...
Posted by Missy Parkin at 12:01 PM No comments: 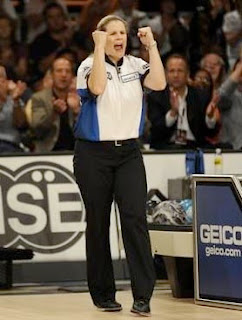 It's been a little over a week since Kelly Kulick became the 1st woman to win a PBA tournament and not only win, but defeat one of bowling's great players, in a MAJOR event.

I was on hand that week at the Tournament of Champions held at Red Rock Lanes in Las Vegas, Nev. I was consequently in town to cheer on my best friend Scott Norton, who earned a berth into the prestigious tournament through winning the Regional Players Invitational (RPI) in early December. (The win also grants Scott an exemption on the PBA tour for next year.)

I attended the qualifying rounds of the event, mostly cheering on my friend, but every once in a while going to check on Kelly. She was amazing that week - very confident, throwing the ball very well and had a happy demeanor throughout the competition. The other real treat was that her mother had flown in to watch her bowl and was on hand the entire week.

Now, for those of you that aren't aware, women have NEVER been able to bowl in the PBA Tournament of Champions. This year, the PBA decided to change that rule by awarding a berth into the T of C to the winner of the PBA Women's World Championship, which was held at the World Series of Bowling this past summer in Detroit. Kulick defeated Shannon Pluhowsky for the title. (On a side note... Kelly defeated "yours truly" in the round of 4 to make it to the TV show.)

Now back to the T of C...if you watched even one block of that tournament, it was pretty obvious who had the fans. The bleachers were always full behind her lanes and cheers galore could be heard anywhere in the center if she simply knocked down all 10 pins. The entire atmosphere was one to remember and I'm sure one Kelly will never forget.

Everyone either saw, heard or read about the TV show. Kelly was poised and determined. No one was going to beat her that title match. And as a result, she is now touring the country, going from talk show to talk show, interview to interview, and hopefully changing the public's view on our sport and getting more respect for what we do on a daily basis. Congrats to Kelly for making history and reinvigorating the sport we all love!
Posted by Missy Parkin at 11:37 AM No comments: