Last weekend, I bowled the PBA Jackson Rancheria Casino Resort Championship at Gold Country Lanes in Sutter Creek, CA. For those that aren't familiar with the area of Sutter Creek, it is situated in the middle of Gold Country in what is known as the Mother Lode, a region where the majority of gold was discovered during the 1849 California Gold Rush. 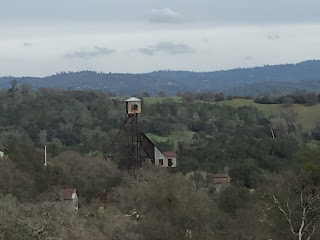 For the PBA Regional event, we competed on the PBA 50 Standard oil pattern which is 42' and typically plays pretty high scoring. I bowled on A squad and started out of the gates strong using the New Hammer Scandal, having the front 7 strikes both of my first two games, shooting 246 and 257. I followed that up with a 233, 225, 233 and 223. Then needing to switch to my Paradox Pearl, I shot 183 and 218 for +218 overall, which put me close for the top 16 cut to match play.


While awaiting my fate over making the cut, I ventured to the historic downtown area of Jackson. Amidst the antique shops and candy stores, I found an amazing gem to have lunch at - Rosebud's Cafe. All of the food was farm to table. I had the absolute BEST sandwich I've ever had - a pork belly sandwich, with fresh sprouts on a homemade roll with homemade strawberry jam and served with made from scratch sweet potato fries. AMAZING! Afterwards, I ventured to downtown historic Sutter Creek, but not before stopping at the lookout point of the old Kennedy Gold Mine. 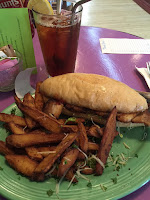 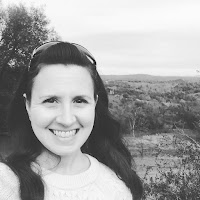 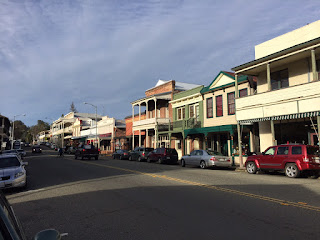 Later I had learned that I had qualified 14th and did indeed make the top 16 matchplay finals. The Round of 16 consisted of a best 3 out of 5 format, so the first person to win 3 games would move on and the loser would be knocked out of the tournament.

I bowed against amateur Mark Del Cerro Jr., who happened to be bowling next to me during all of qualifying. I knew he had a very good look on the pattern and knew I needed to shoot big numbers to win the match. In the opening game, I shot 257 using my Hammer Scandal winning against his 223. He then came back to beat me 246-230 evening out the match at 1-1. In game 3, I needed to strike out in the 10th frame to lock him out, but unfortunately left a stubborn 10 pin and he struck to beat me 233-215.

Being down 1-2, it was a do or die situation as I switched to my Paradox Pearl on the right lane and continued to use my Scandal on the left lane. The match came down to the 10th frame and I needed to strike my first ball in the 10th frame to win, and I did just that winning 248-227. Going into the final 5th game, I started to lose my look as the lanes transitioned. He bowled another big game defeating me 254-212.

Even though in the end I lost the match, I still shot +162 for those 5 games, which is nothing to be upset about. I ended up coming in 10th place overall in the tournament. Although I am seeing definite improvement on the things I am changing in my game, I know I still have lots of work to put in before the PWBA Tour beings at the end of April.

Missy Makes Matchplay at the Masters

This year, I competed in the sold out field of 417 bowlers at the USBC Masters at Woodland Bowl in Indianapolis, IN. We bowled three 5-game blocks of qualifying, two on fresh oil and one on the burn (oil left over from the previous squad), before cutting to the top 64 players for matchplay. This year's oil pattern was 39' using ice oil (shown below.) 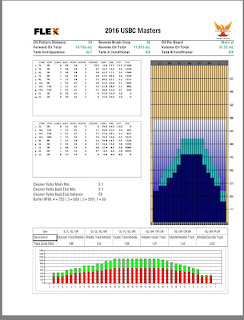 The scoring pace was pretty low, putting a premium on shot making and picking up spares. Fortunately, I was able to get lined up early and shot 266 game one using my Track Paradox (with a pocket 7-10 split in the middle of all of my strikes.) I then struggled on the next pair and managed to shoot 181. I then switched to my Track Paradox Pearl and shot games of 224, 190 and 200 to end the block at +61 and just in the current cut number for the top 64.

The next block, I again started out strong using my Paradox and shot 221 and 236. I then hit a horrific pair and shot 157, followed with a 187. I managed to pull everything back together the last game, ending with a 235 for +97 overall.

The final block we bowled on the burn. Needing a good block to stay in the cut number, I wanted to stay clean and fill frames. I started out shooting 225 using the new Columbia 300 Swerve FX, but followed it with a 179 and a clean 196. I then switched to the Black Widow Limited and ended the block with a 211 and 212 to get to +120 overall. That put me right on the bubble for the cut to the top 64. Crossing all fingers and toes going into the final game of qualifying for the final block, I managed to barely squeak in to matchplay earning the final 64th position and facing top seed and three-time Player of the Year Jason Belmonte in the opening round match.

I was very excited to again be back into the Matchplay finals at the USBC Masters. I came in tied for 9th place at the 2012 USBC Masters in Las Vegas, NV. This year, I was one of only four females to qualify for the top 64 cut. Matchplay at the Masters, similar to the USBC Queens, puts players into a 64-person bracket with a 3-game total pinball double elimination format. I faced three-time defending champion Jason Belmonte in my opening match. My game plan worked, as the scoring pace was very low for the match, but unfortunately, I didn't execute as well as I would have hoped and couldn't manage to stay out of trouble. I lost the match 507-613.

That put me into the losers bracket early, which is NEVER where you want to be because it's endless matches from there on out, in order to make the TV finals. My next match was a familiar one, as I went on to face Kelly Kulick in Round 2.  In another very low scoring match, it went down to the final frames, but in the end I lost 538-541 and was knocked out of the tournament.

Although I would have hoped for a better matchplay finals, I am still very proud of how I competed all week. I never missed a single pin spare, made quite a lot of difficult split conversions and overall could see that my hard work the last couple of months was paying off.

Congratulations to Anthony Simonsen who won the USBC Masters becoming the youngest player to win a PBA Major title at 19 years old.

Posted by Missy Parkin at 10:07 PM No comments: