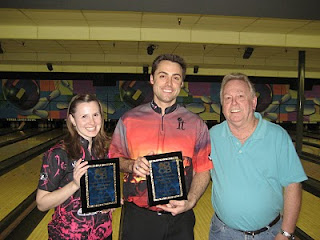 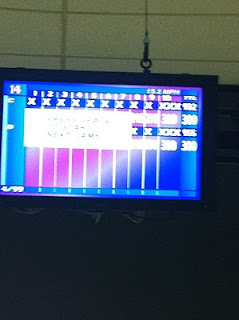 This past weekend, Scott Norton and I bowled the PCB Mixed Doubles event at Yorba Linda Bowl. The weekend definitely turned out to be one weekend of bowling that I will never forget!

On Saturday, we bowled the qualifying portion of the event, bowling nine straight games. The field was then cut to the top 12 teams for Sunday's competition, in which we then bowled 12 games of round-robin matchplay.

I started out the tournament using the new 900 Global OMG! ball. It was working great, but then the oil pushed down the lane and I needed a ball with a little more backend, so I switched to my newly drilled Eagle by 900 Global. That was the best decision of the day, as I threw this ball the entire time.

Then, during the fourth game, that's when the weekend craziness began. Both Scott and I starting stringing strikes. Before I knew it, we both had the first 9 strikes and we were in the 10th frame! I just couldn't believe it! I went up first and threw the first two shots in the 10th really well, striking in both. Then got up for my final shot and packed another strike, shooting a perfect 300 game! The entire bowling center had stopped bowling and were behind our pair. Scott and I high-fived, the crowd was screaming and Scott turns to me and says "I'm nervous!" (Mind you Scott has shot over 40 - 300 games in his career.) And I looked at him and said back, "No, you're fine!" And then he replied. "No, seriously, I'm really nervous right now! More nervous than I was bowling on the TV show!"

Scott handled himself, as he usually does in pressure situations, and packed the first two strikes flush in the pocket. Now, he was only one shot away from shooting a perfect 300, thus giving us a perfect 600 team score. He went up and packed the last shot for a strike and the entire bowling center went nuts! It was unbelievable! We later found out that it was only the 4th time in history that a mixed doubles team shot a 600 game! Absolutely insane!

I was still using my 900 Global Eagle and Scott was using a Loaded Revolver to shoot our perfect 600 score.

On Sunday, we then bowled 12 games of round robin matchplay, with each individual game win earning a 10 pin bonus and each team game win earning a 30 pin bonus, for a total of 50 possible bonus pins per game. Therefore, winning matches was definitely the key to success!

The lanes played a little different on Sunday, which is pretty typical for any tournament, but Scott and I had a bit of trouble getting lined up to start. We shot 185 and 213 for a 398 total and got swept for the bonus pins. This quickly dropped us from 1st place down to 3rd! We then continued to get swept the next game with a 464 team game.

In game three, we finally said enough is enough and started winning the ever important bonus pins. We won 40 bonus pins the next 3 games, shooting scores of 493, 472 and 473. In game 6, Scott won his point shooting 227, but we failed to win any more bonus pins.

It was one incredible weekend that I definitely won't forget! 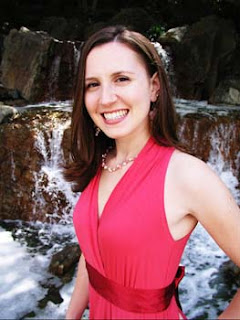 Recently I bowled an 8-gamer Mixed Doubles/Over-Under Doubles at Classic Lanes in Norco. The 8 game format counted towards both your doubles and your singles score. I bowled with my best friend Scott Norton. Needless to say, he definitely held me up during the tournament.

I guess I'm saving up all of my cary and high scores for next weekend when we bowl the PCB Mixed Doubles tournament together at Yorba Linda Bowl.

Recently, I competed in our local Orange County Tournament. Our team decided to bowl the doubles and singles portion of the tournament first and then bowl team event the next weekend.

Each event (Team, Doubles and Singles) is three games and then all 9 games combined acts as your all-events score.

The doubles and singles portion of the event was held at AMF Carter Lanes in Fullerton. We bowled our doubles event first, in which I was paired with Samantha Jimenez. We both started out REALLY well. She shot 255 and I had the first 10 strikes, but then left a stubborn 10 pin for a 289 game. I was using a Bounty Hunter Pearl by 900 Global. Our second game we shot 418 total, Samantha shooting 183 and myself shooting 235. The final game we stepped it up a notch and shot a team score of 490. Samantha bowled a 243 and I shot 247.

The following weekend we came back for team event, which was held at La Habra 300 Bowl. I unfortunately was really sick this weekend and didn't bowl too well. Our team did ok, but didn't place too high in team event. I only shot 588 for these three games, shooting 2071 for all-events. I ended up finishing in 5th place overall in the tournament.

I also bowled doubles and singles in the Open portion of the tournament as well, with another woman - Debbie Barrette. In doubles, I shot 246, 222 and 230 for a 698 series. Debbie shot a 548 series, but with her handicap we shot a doubles score of 1416.

I didn't fait too well in singles because it was the same weekend that I was sick and I pretty much ran out of gas the last three games, shooting 200, 194 and 217 for a 611 series.