Come and watch Missy Parkin as she defends her Women's World Bowling Tour title at the Southpoint Hotel and Casino arena in Las Vegas, Nev. on Sunday, November 3rd at 10am.

Admission is free to watch the TV taping of the Women's World Bowling Tour final. Click here for FREE Tickets. 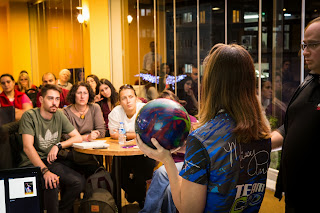 This week, I ventured to Istanbul, Turkey and Athens, Greece to conduct clinics on behalf of Columbia 300. The clinics, which primarily targeted women, were the first of this nature in both countries.

First, I travelled to Istanbul, Turkey to meet with the Ebonite International exclusive distributor Trianka and Trianka Bowling Academy. Since the clinics started at night, to accommodate the working bowlers, I was able to go sightseeing during the day.

Istanbul’s rich history really makes the City one of the most fascinating in the world. On Day 1, I was able to visit and drive along the Bosphorus, a water channel that connects the Sea of Marmara to the Black Sea and separates Europe from Asia. This unique and picturesque waterway is the narrowest strait used today by many commercial ships transporting goods across Europe and Asia. We stopped for a traditional Greek Breakfast along the Bosphorus and the food is so amazing. I challenge everyone to not judge a book by its cover when it comes to food because I otherwise wouldn't have been able to experience the rich food of Turkey. 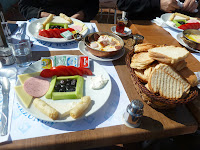 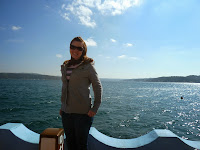 Later that evening we started Day 1 of the clinics. In Istanbul, the clinic was comprised of a two-day event, allowing women and junior bowlers to attend. The seminar marked the first time in Turkey that a seminar was geared specifically towards women.  Several of the women bowlers did bring along their spouses, who were able to attend the classroom portion of the event only. Day 1 focused on Bowling Tips as well as covered the entire line of products in the Columbia 300 brand. After a classroom session, I then worked one-on-one on the lanes with the bowlers, helping with their physical games. 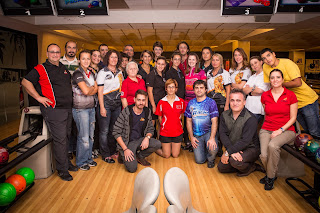 During the day on Day 2, we were able to visit several historical places in Istanbul. We first went to the Basilica Cistern, an underwater reservoir that was built by the Byzantine Emperor Justinian in the 6th century. This enormous underground palace, as it’s referred to, is definitely one of the ancient marvels of architecture from that time period and can hold up to 100,000 tons of water. 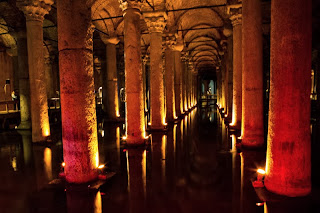 Next, we ventured to Hagia Sophia, which was originally built as a Greek Orthodox church in 537 A.D. In 1453, the church was then converted to an imperial mosque. It is very interesting to see both religions displayed throughout the beautiful structure, for example a minbar, also known as a pulpit, (which is where the Muslim leader of the mosque speaks from during prayer time) is situated right in front of a beautiful mosaic of the Virgin Mary.

Our next stop was the Blue Mosque, built in 1609, which is one of the most famed historical spots in the City. Although we didn’t get to go inside, since we were there during prayer time, we did get to see the intricate structure up close. After a yummy Turkish lunch, we then made our way to the Grand Bazaar, which was originally constructed in 1461 and is one of the largest and oldest indoor markets. I was able to purchase a few souvenirs and not get lost in the 3,000+ shops that encompass the venue. 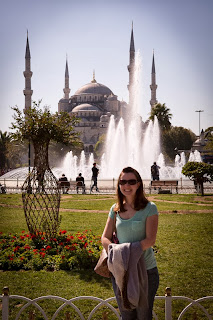 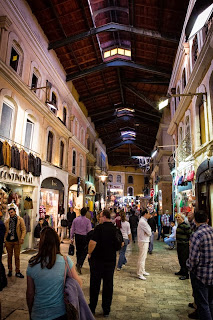 The next day I flew to Athens, Greece to meet with our new distributor 9th Frame. After checking in to my gorgeous ocean view hotel room, I quickly changed and then was off to conduct the first of two clinics. In an effort to boost the level of competitive women bowlers in Greece, the clinics in Athens were open only to women. The clinic focused on lane play strategies and allowed the bowlers to also compete on three different oil patterns, which is a first for clinics in Greece. The clinics also heavily focused on explaining the Columbia 300 brand of products, since this brand is specifically struggling in Greece. 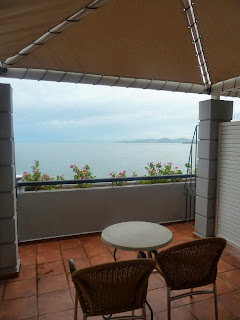 After the clinic, we then went out to a traditional Greek dinner, which meant we ate at 10pm and ate A LOT of yummy food. I’m pretty convinced that Mediterranean food is the best food in the world. Several different plates of seafood, salads and meats kept coming to the table and everyone eats family style, which makes it nice since you are able to try a little bit of everything. After our 2+ hour meal with over 15 people in attendance, we then called it a night and I went back to the hotel. 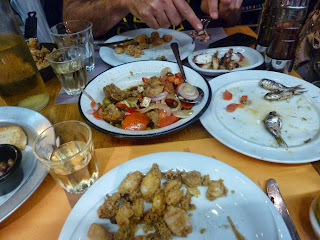 The next day, I was able to go sightseeing around Athens. I had been to Athens once before on my honeymoon, but it was only for a small portion of the day since it was a part of a cruise ship sightseeing tour. I was very happy that I was able to again visit the Acropolis and climbed up the hill to again see the Parthenon and neighboring structures. This time, I was able to explore a little more of the historical City, by also visiting La Plaka, a section of small alleyways that have tons of shops and cafes, as well as visit the ancient market and Athens Flea Market. We had lunch in La Plaka at a Scholarhio, which is a family restaurant that doesn’t have a menu. The waiter brings out several small dishes that have already been prepared and you choose 3-5 items from the tray. This also proved to be very yummy, did I mention I think I gained a few pounds on this trip. 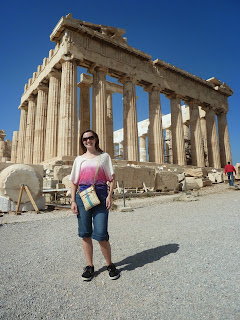 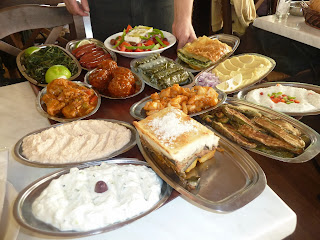 One of the very interesting new things I was able to do was visit the Acropolis Museum, which wasn’t finished when I had previously been to Athens. That museum was absolutely gorgeous and I can definitely understand why it’s already one of the top museums in the world.

After a day full of amazing sightseeing adventures, I then headed to the bowling center to conduct the second clinic. After another successful clinic and a great turnout, I had another late Greek dinner before going back to the hotel and packing for my trip home.

I had such an amazing time promoting the sport and meeting tons of new friends along the way. I want to again thank Columbia 300, Trianka Bowling Academy and 9th Frame for making this trip possible.  I hope to make it back to this part of the world sometime soon!  J Till next time…
Posted by Missy Parkin at 11:58 AM No comments: 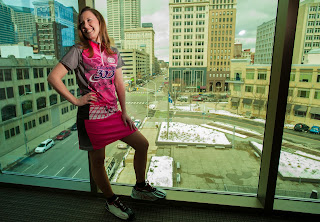 There are a total of 20 qualifying squads and the top 56 make the finals on Sunday. Missy used her Columbia 300 Enigma during the block.