Missy Parkin won the World Bowling Tour Women's final from the top seed position to claim the title and remain ranked number 1 in the world for female bowlers.

Missy, who accumulated 369 points over the two-year point system in World Bowling Tour events, secured the top seed position over Kelly Kulick with 344 points and Liz Johnson with 295 points. The top three women in the points standings qualified for the World Bowling Tour televised finals which were conducted at a constructed 2-lane arena setting inside the Southpoint Hotel and Casino in Las Vegas, Nev. 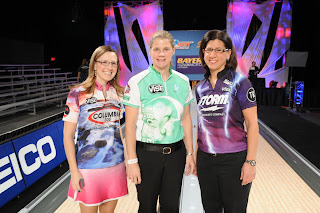 In the opening match, Kulick struck out in the 10th frame to shoot 260, forcing Johnson to double and get count to move on. Johnson did just that, throwing the first two strikes in the 10th frame and shooting 267 to Kulick's 260.

Johnson then went on to face, top seed Missy Parkin. Parkin stayed clean to start the match, as Johnson caught a couple of early splits. Then, in the middle of the match, Parkin starting stringing strikes and went on to claim the victory and $20,000 prize, shooting 238 to Johnson's 190. 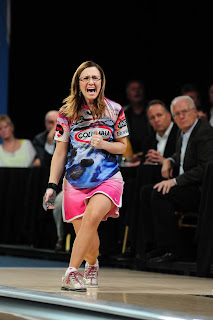 On the men's side, it was Chris Barnes who climbed the ladder defeating Mike Fagan and Mika Koivuniemi to win the men's World Bowling Tour finals. 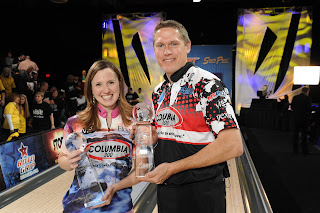 Posted by Missy Parkin at 11:57 AM No comments: 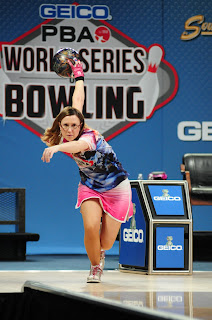 Missy earned 369 points to claim the top seed in the World Bowling Tour TV finals, placing just ahead of Kelly Kulick with 344 points and Liz Johnson with 295 points. Missy will face the winner of Kulick and Johnson in the stepladder finals.

Points are earned by placement in World Bowling Tour events and are calculated based on the finishing position of each bowler compared to their gender. Each event awards points based on how a bowler places, where first place earns 50 points, second place earns 40 points etc., awarding points down to 50th place. The points earned at each event are then accumulated over a two-year period.

Missy had only 35 points in the first World Bowling Tour year, thus earning a majority of her points bowling in tournaments all over the world this past season. This year, she competed in Japan, France, Thailand, Austria and Australia as well as other national events throughout the United States.